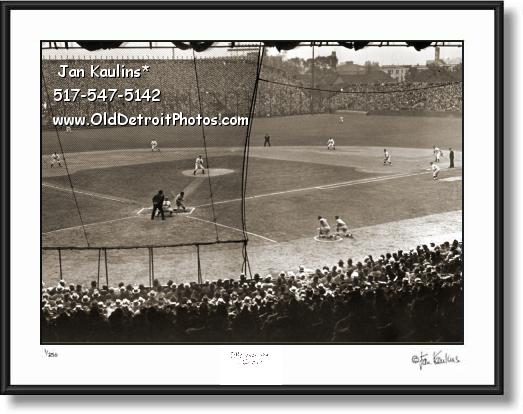 "The 1935 World Series featured the Detroit Tigers and the Chicago Cubs, with the Tigers winning in six games for their first championship in five Series appearances. They had lost in 1907, 1908, 1909, and 1934.

The Tigers won despite losing the services of first baseman Hank Greenberg. In Game 2, Greenberg collided with Cubs catcher Gabby Hartnett and broke his wrist, sidelining him for the rest of the Series. Marv Owen replaced him at first base and went 1 for 20. Utility infielder Flea Clifton was forced to fill in for Owen at third base and went 0-for-16 in the Series.

The Cubs had won 21 consecutive games in September (still a record as of 2013), eventually taking the National League pennant by four games over the defending World Series champions, the St. Louis Cardinals.

In Game 6, Tommy Bridges pitched a complete game victory to win the Series for Detroit. With the score tied 33 in the top of the ninth inning, Bridges gave up a leadoff triple to Stan Hack, but retired the next three batters without the runner on third scoring. In the bottom of the ninth, Goose Goslin drove in the winning run with two outs. After the game, manager Mickey Cochrane said the following of Bridges' gutsy performance: "A hundred and fifty pounds of courage. If there ever is a payoff on courage this little 150-pound pitcher is the greatest World Series hero."

In addition to Bridges, the Tigers had a hitting hero. Right fielder Pete Fox accumulated ten hits and an average of .385 for the Series. Fox hit safely in all six games.

Detroit owner Frank Navin, then 64 years old, had been running the organization for 30 years and had seen four of his teams win American League pennants, only to lose four World Series. Six weeks after the Tigers finally won the World Series in October 1935, Navin suffered a heart attack while riding a horse and died. This was the near the end of an era for the old NAVIN FIELD which soon became BRIGGS STADIUM. This is a very rare and wonderful game photo of this historical DETROIT TIGERS 1935 NAVIN FIELD WORLD SERIES CHAMPIONSHIP GAME photo picture print for sale.

THESE BLACK AND WHITE DETROIT PHOTO ART PRINTS ARE VERY HIGH QUALITY REPRODUCTIONS OF ORIGINAL OLD VINTAGE HISTORICAL DETROIT PHOTOGRAPHIC PRINTS. THESE SEPIA TONED BLACK AND WHITE DETROIT PHOTOS ARE OFFERED FOR SALE HERE FOR THE VERY FIRST TIME. THEY HAVE BEEN MADE FROM ORIGINAL NEGATIVES OR ORIGINAL FIRST GENERATION PRINTS, MANY OF THEM ARE 50 YEARS OLD AND SOME DATE TO THE EARLY 1920's AND 1930's. THE RARE OLD DETROIT ORIGINAL PHOTOS AND BLACK AND WHITE NEGATIVES USED FOR THESE PRINTS HAVE BEEN OBTAINED FROM HISTORICAL SOCIETIES, NATIONAL ARCHIVES, THE LIBRARY OF CONGRESS AND NUMEROUS PRIVATE COLLECTIONS. IT HAS TAKEN SEVERAL YEARS TO PUT THESE OFFERINGS TOGETHER ON THIS WEBSITE. MANY OF THESE PHOTOS ORIGINALLY CAME FROM OLD DEFUNCT NEWSPAPER AND MAGAZINE ARCHIVES, WHERE THEY WERE USED ONCE FOR A STORY AND THEN USUALLY JUST THIS ONE ORIGINAL PRINT WAS MADE AND KEPT FOR THEIR ARCHIVES. HENCE, THESE HISTORICAL IMAGES WERE NOT ORIGINALLY MADE TO BE FOR SALE, BUT WERE TO BE USED AS IMAGES FOR NEWS STORIES AS THEY UNFOLDED--MAKING THESE IMAGES EXTREMELY RARE HAVING SURVIVED SO MANY YEARS. VERY FEW OF THESE IMAGES HAVE EVER BEEN OFFERED FOR SALE TO THE PUBLIC UNTIL NOW.

THE ORIGINAL OLD DETROIT BLACK AND WHITE PHOTOGRAPHS HAVE DIGITALLY BEEN RE-MASTERED AND ALL MAJOR FLAWS, SUCH AS TEARS, SRACTCHES, MISSING PIECES, FOLDS, INK STAINS ETC. ON THESE RARE PHOTOS HAVE BEEN PAINSTAKINGLY REMOVED AND CORRECTED AND HIGH QUALITY PRINTS OF THESE HISTORIC RARE DETROIT BLACK AND WHITE SEPIA TONED PHOTOS ARE NOW OFFERED, FOR THE FIRST TIME, ON THIS WEBSITE WWW.OldDetroitPhotos.COM . THESE PHOTOS HAVE BEEN BEAUTIFUL RESTORED AND ARTISTICALLY SEPIA TONED AND OFFERED IN A LIMITED EDITION OF INDIVIDUALLY PRINTED PHOTO PRINTS. THEY ARE READY FOR DISPLAY IN YOUR HOME OR OFFICE. HERE IS YOUR CHANCE TO OWN AND ENJOY SOME VERY SPECIAL AND UNIQUE DETROIT HISTORY.