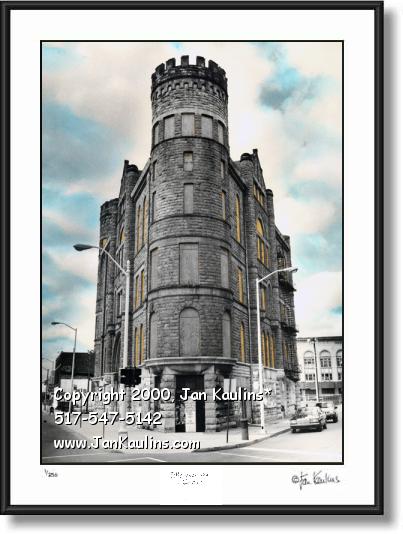 
GAR Building Detroit photo picture print art for sale - G.A.R. Bldg. photo picture print photography for sale. This color G.A.R. Building photo in Detroit was made from an original black and white photograph that has been hand-colored. The Grand Army of the Republic, The GAR, was organized one year after the end of The Civil War. It was started by a group of Union Civil War veterans who wanted to preserve the memory of their fallen comrades. Work on The Detroit G.A.R. Building, at the corner of Cass and Grand River, began in 1898 and was completed in 1900. Fitting for the groups military origins, the Detroit GAR Building was designed to give the appearance of a fortified strong castle. The GAR Building served as headquarters for the group until the 1930's, by which time the Civil War veterans has passed away and with them the organization. The building has had several incarnations since then, but has been shuttered since 1982. The structure of the boarded up building appears to be intact and would make a wonderful restored historical and unique building for Detroit.